Corigliano-Rossano is an Italian town of 77 100 inhabitants in the province of Cosenza in Calabria. It was established on March 31, 2018, from the merger of the municipalities of Corigliano Calabro and Rossano.

Corigliano Calabro – On the last northern outskirts of Sila Greca, Corigliano Calabro has an ancient nucleus (the characteristic Ognissanti district) with a dense fabric, arranged in steps on a hill, with narrow and suggestive streets. The fertility of the agricultural areas and the extensive cultivations of citrus fruits have meant that in recent decades the village developed, with the growth of the outer quarters and the transformation of the historic center. Center in the province of Cosenza, Corigliano Calabro is located 210 meters above the sea level and has 36.764 inhabitants. The original nucleus originated in the Middle Ages, when the inhabitants of the plain sought safer mansions.
We can visit the church of Sant’Antonio, built in the fifteenth century as a church of the Minor Conventuals, and completely rebuilt in 1740-41. Inside it preserves a good example of the 18th century calabrase decoration with marble stuccos and balustrades. We also admire the majestic bridge with two overlapping arches 20 meters high, and the convent of San Francesco di Paola, built in the second half of the fifteenth century and then transformed in 1839. Very impressive visit to the castle, with four cylindrical towers and a high keep of the eleventh-twelfth century, with numerous decorations housed inside the nineteenth century, and the nearby church of San Pietro, originally from the second half of the eleventh century, but completely transformed in the eighteenth century. Continuing our visit to Corigliano Calabro we meet the church of Santa Maria Maggiore, built in the tenth century, with paintings of the Neapolitan school and examples of the seven hundred Calabrese kept inside. Finally we admire the church of the Madonna del Carmine with three Gothic-Catalan stone portals of the fifteenth century.
Views:
The ducal castle, Church of Carmine, Collegiate Church of San Pietro, Porta di Prando (also Brandi or Librandi).
Events:
May Day Fair, which takes place on the first Sunday of May in the seaside village of Schiavonea.
Fiera dei morti, which takes place in the seaside village of Schiavonea on 1 and 2 November each year and recalls the population of the entire plain of Sibari;
Patronal feast in honor of the Patron Saint of Corigliano San Francesco di Paola, which takes place from 23rd to 25th April each year;
Summer Coriglianese, which takes place in August with concerts, shows and film performances. The “Alba Jazz” music festival is very visible, as well as the “Grande Festa di Via Roma” which emphasizes ancient crafts.
Feast of “San Francesco di Paola al Monte” held on the last Sunday of August in Piana Caruso;
Feast of the Blessed Virgin of the Graces which takes place in the city’s port in the third week of September;
Feast of the Madonna della Neve which takes place in Schiavonea from August 3rd to 5th each year.

Rossano (IPA: [rossaːno]), mistakenly also called Rossano Calabro to distinguish it from Rossano Veneto, is a fraction of 36 623 inhabitants, currently part of the municipality of Corigliano-Rossano, in the province of Cosenza, in Calabria. The city is also called Rossano la Bizantina and Rossano city of Codex, in homage to the Code Purpureo, one of the oldest evangelicals in the world and kept for centuries in Rossano (Museo Diocesano and Codex), included in the list of UNESCO heritage in the category “Memory of the World”.

On October 22, 2017, a popular referendum was held with which the citizens of the municipality of Rossano and the neighboring town of Corigliano Calabro were asked whether or not they wanted to start a merger process between the two municipalities. The referendum has had a favorable outcome giving life to the third city by population of Calabria. In Rossano they voted for the Yes 12.715 entitled to 791 for No. A Corigliano Calabro 7,674 entitled Yes voted against 4.833 No. Rossano has voted 44.70% of those entitled, while 33% in Corigliano. The new municipality has taken the name of Corigliano-Rossano.

The territory includes land of different geological origins, with different characteristics (rocks, clays, sands), to which different types of flora correspond. Arboreal cultures (olive groves, citrus groves and orchards) dominate the landscape. In areas near the coast there are also poplar groves. There are two monumental oak trees (a English oak and a Quercus virgiliana) in the territory.

History
It is presumed that it was founded by the enotri around the eleventh century BC, it came under the control of the Magno-Greek (VII-II century BC) and later became the Roman outpost in control of the Sibari Plain and in the unsuccessful attempt to conquer the territories mountains of the Sila, then occupied by the bruzi. In the II century Emperor Hadrian built a port capable of accommodating 300 ships. Between 540 and 1059 Rossano experienced a period of great social, artistic and cultural splendor under the dominion of the Byzantines: the strategic seat, its strategic position – “the city attests its soul and history in the face and in the site. an irregular prominence of the first spurs of the Sila, to which it looks at noon, stands on a reddish wall of rock, bandaged and closed almost by a natural vault, while to the north, facing the Ionian Gulf, it is joined to the plain by precipitous .. . “(G. Sapia, Historical Profile of the city, Corigliano, 2001, 11) which constituted a natural protection, together with the theory of walls and fortifications, from external incursions – it made it attractive destination of conquest by numerous invaders (Visigoths , Lombards, Saracens) but was never conquered; home to the archdiocese, documented since the tenth century, it also constituted a center of irradiation of the monastic spirituality of the Greek-Italian tradition, of which numerous traces and historical, artistic and architectural remains are preserved.

In the following centuries it passed under the rule of the Normans (1059 – 1190) and then of the Swabians (1190 – 1266) conserving itself a royal city and therefore free university, up to the politics of fief followed by the Angevins (1266 – 1442), and then by the Aragonese (1442 – 1504) and by the Spaniards (1504 – 1714), then continued under the Austrian viceregno (1714 – 1738) and with the Bourbons (1738 – 1860). The feudatarie families were Ruffo, Marzano, Sforza of Milan, Aldobrandini and lastly the Borghese of Rome, following the succession of Olimpia Aldobrandini, princess of Rossano, and remained there until the end of feudalism (1806 in the Kingdom of Naples); Bona Sforza of Aragon, Queen of Poland and Grand Duchess of Lithuania, from 1524, in succession of her mother Isabella, was also Princess of Rossano and Duchess of Bari.

At the end of the eighteenth century, Rossano became part of the short experience of the Neapolitan Republic (1799) and during the French decade (1806 – 1815), abolished feudalism, had a political and social growth, however, affected by the devastating earthquake of 1836. Already under the decade it became the capital of the district (28 municipalities), the seat of the administration, the chief town of the district and the seat of the giusticente; with the unit it was seat of 1865 court, of 1875 court of assizes and of the military district and from 1894 to 1926 seat of sub-prefecture. Still in the second half of the 800, it was the center of numerous cultural circles and produced various newspapers and periodicals; in 1876 the Jonica railway was inaugurated and, after a few years, it benefited from the first electric lighting and the first thermoelectric power plants of Calabria.

In ‘900 Rossano has lived all the events that have characterized the political and social life of the South and ultimately of Italy: the Resistance and the struggles of liberation, emigration, the reconstruction of civil and democratic life and finally the expectation of social and material well-being.

Starting from the 50s of the 20th century, the city, like others in Calabria whose historical nucleus had developed in the hinterland in consideration of the salubrity of the places as well as for the natural defensive presidia, continued its expansion mainly in the valley and in the plains , crossed by the major rail and road link infrastructures. The urban expansion that took place a little in all directions near the railway yard – with the construction of new densely populated neighborhoods, schools, sports facilities, public and private services – has substantially spared the historic city from adulteration.

The institutional fusion process underway provides an occasion for a rethinking of the city’s development lines in the wider territory, reconsidering its history and its vestiges, with a view to redeveloping not only the material of places.

Monuments and places of interest

Page of the Codex Purpureus Rossanensis.
In addition to the numerous noble buildings scattered in numerous private properties, in the historic center of Rossano you can visit:

the Diocesan and Codex Museum, with the internationally renowned work: the Codex Purpureus Rossanensis, an ancient Greek gospel evoceliario of the sixth century of Byzantine origin, named UNESCO Heritage on October 9, 2015. According to many it is the most precious illuminated Gospel in the world;
the cathedral of Maria Santissima Achiropita;
the church of San Nilo commissioned by the princess of Rossano Olimpia Aldobrandini (15th century) in honor of the city that gave birth to Saint Nilo, founder of the Greek abbey of Grottaferrata, saint revered by the Catholic and Orthodox churches;
the oratory of San Marco;
the church of San Bernardino (XV century): in late Gothic style, it was the first Catholic church in the city and houses the tomb of Oliverio di Somma (1536) with the statue of the deceased and a wooden crucifix from the seventeenth century;
the church of Panaghia (X century): so named in honor of “Maria Tutta Santa”, is another example of Byzantine religious architecture in whose apse there are traces of at least two pictorial phases, with an older fresco depicting Saint Basil and a fragment of the fourteenth century which depicts St. John Chrysostom;
the church of San Francesco di Paola (late 16th century): with a Renaissance portal and a cloister;
the church of Santa Chiara (XVI century): commissioned by Princess Bona Sforza;
the liquorice museum.

Effigy of the Madonna Achiropita.
Nearby are instead:

the abbey of Santa Maria del Patire (11th-12th century): immersed in the green hills, it preserves splendid arabesque mosaics floors, the Norman-style apse and an old wooden portal. It was founded by the monk and priest St. Bartholomew of Simeri around 1095 on the ruins of an oratory;
the Sant’Angelo tower (16th century) is an ancient military building fortified by Bona Sforza between 1543 and 1564, within whose merchant complex there is an excellent example of a perfectly preserved fondaco 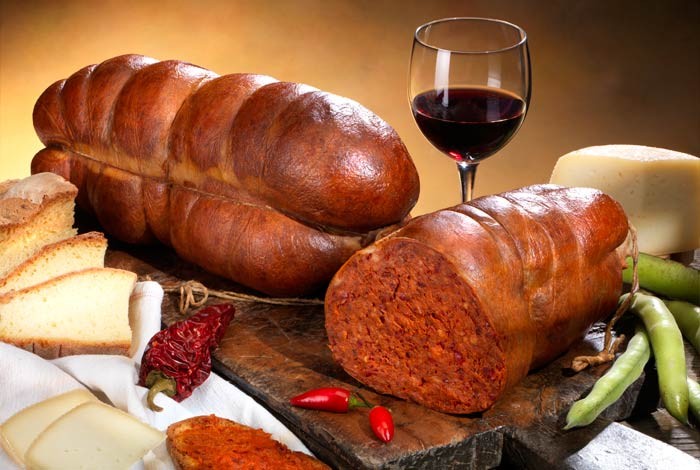 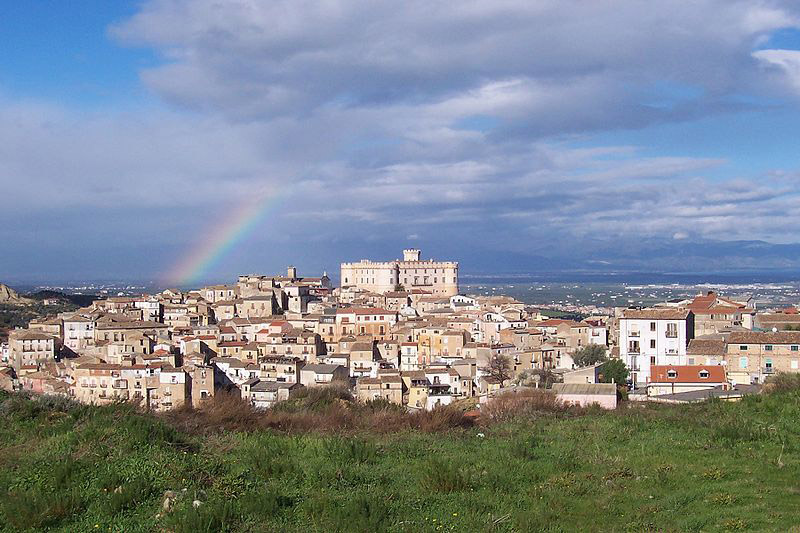 Unfortunately there are no accommodations at this location at the moment.

Calabria: Places not to be missed

Tour Calabria between taste and culture

Tour In the steps of San Francesco da Paola

Tour the Byzantine Calabria: Rossano and the upper Ionian

Unfortunately there are no cruise offers at this location at the moment.

Unfortunately there are no car rental offers at this location at the moment.