(the following program is purely indicative, and can be modified if requested) 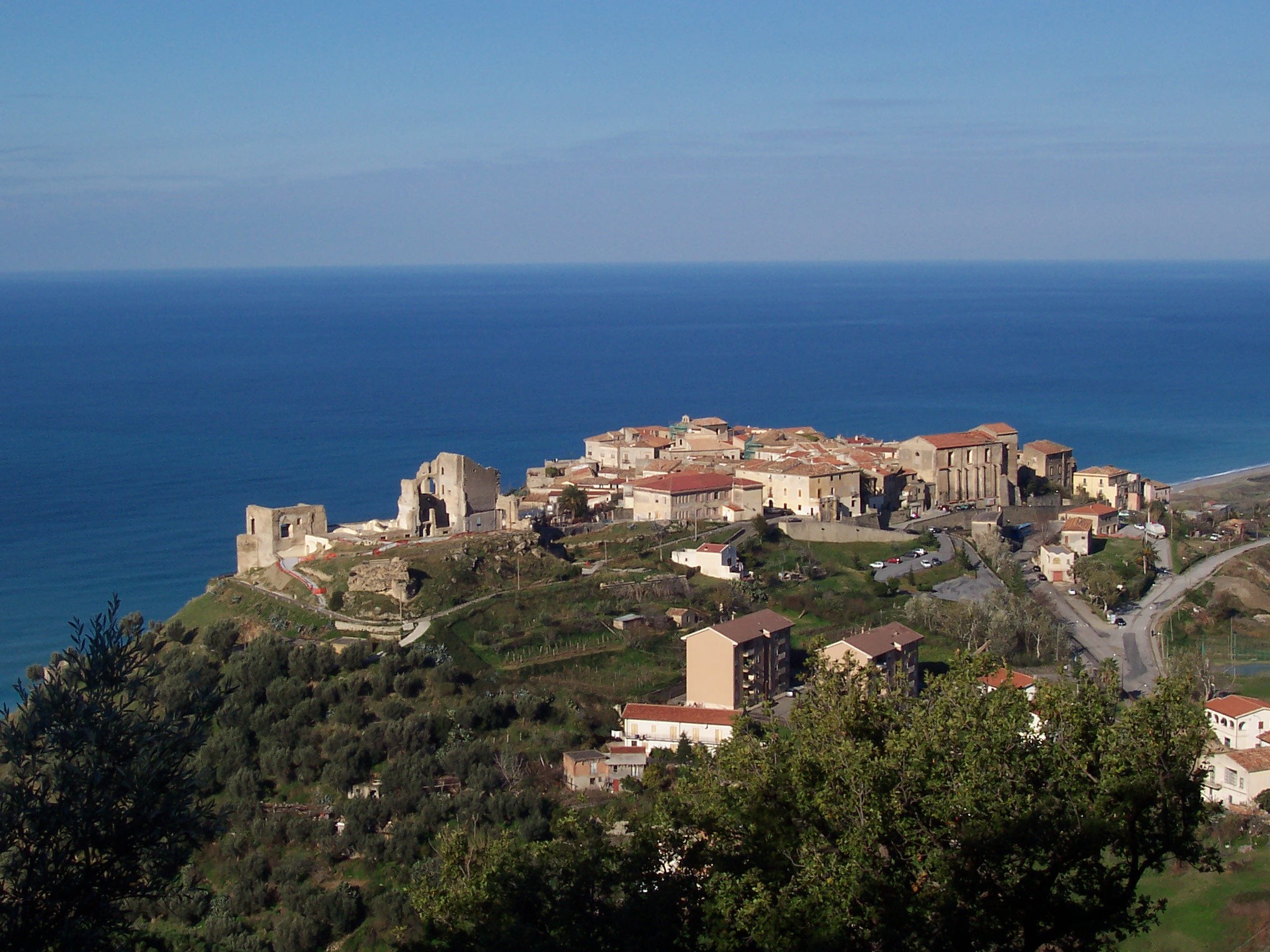 Day One: FIUMEFREDDO BRUZIO
Arrival in Calabria. Transfer to the hotel and accommodation in the reserved rooms. In the afternoon visit to Fiumefreddo Bruzio. Going along the road between Paola and Amantea one may not miss to have a break in the small village of F.B. It is still within the ancient walls, the small medieval center was already listed among the most beautiful Italian towns in 2005, it offers highly interesting places such as the “Palazzo della Valle” also of medieval origins, of which rooms are now covered by Salvatore Fiume’s murals, a world-known Sicilian artist. Beyond the numerous glimpses of the landscape, it is worth paying attention to the two palaces from feudal times and the numerous churches, among which the Church of S. Chiara from the 16th century, the Church of San Rocco with its hexagonal plant and the Mother Church (17th century) stand out, which is embellished by Pascaletti’s precious paintings. Return to the hotel for dinner and overnight.

Breakfast and leave for Cosenza. The city in its historical center preserves artistic jewels such as the Gothic-Cistercian Cathedral of Foggia and the Archbishop’s Palace. In the cathedral you may admire precious works of art and of goldsmith’s art such as the 13th century Table of the “Madonna del Pilerio” and Luca Giordano’s canvas dedicated to the Immaculate. Then we are going to visit the imposing Svevo Castle from the Norman period that dominates the whole city and offers a nice view on it and on the mountains of Sila. Transfer to Belmonte Calabro. Lunch at a restaurant (optional). In the end we start to visit the town. Its characteristic historical center rich in history, glimpses and striking corners perched on a hill is surrounded by walls, the evidence of a past that leaves obvious traces. Belmonte has one of the most interesting and best preserved historical center in the low Tyrrhenian coast. Places to visit: the Svevo Castle from 1207, the Parish Church built in the 16th century, the Church of Immaculate (17th century) and the Church of Carmine from the 17th century. It is also interesting to visit the Museum of the environment, 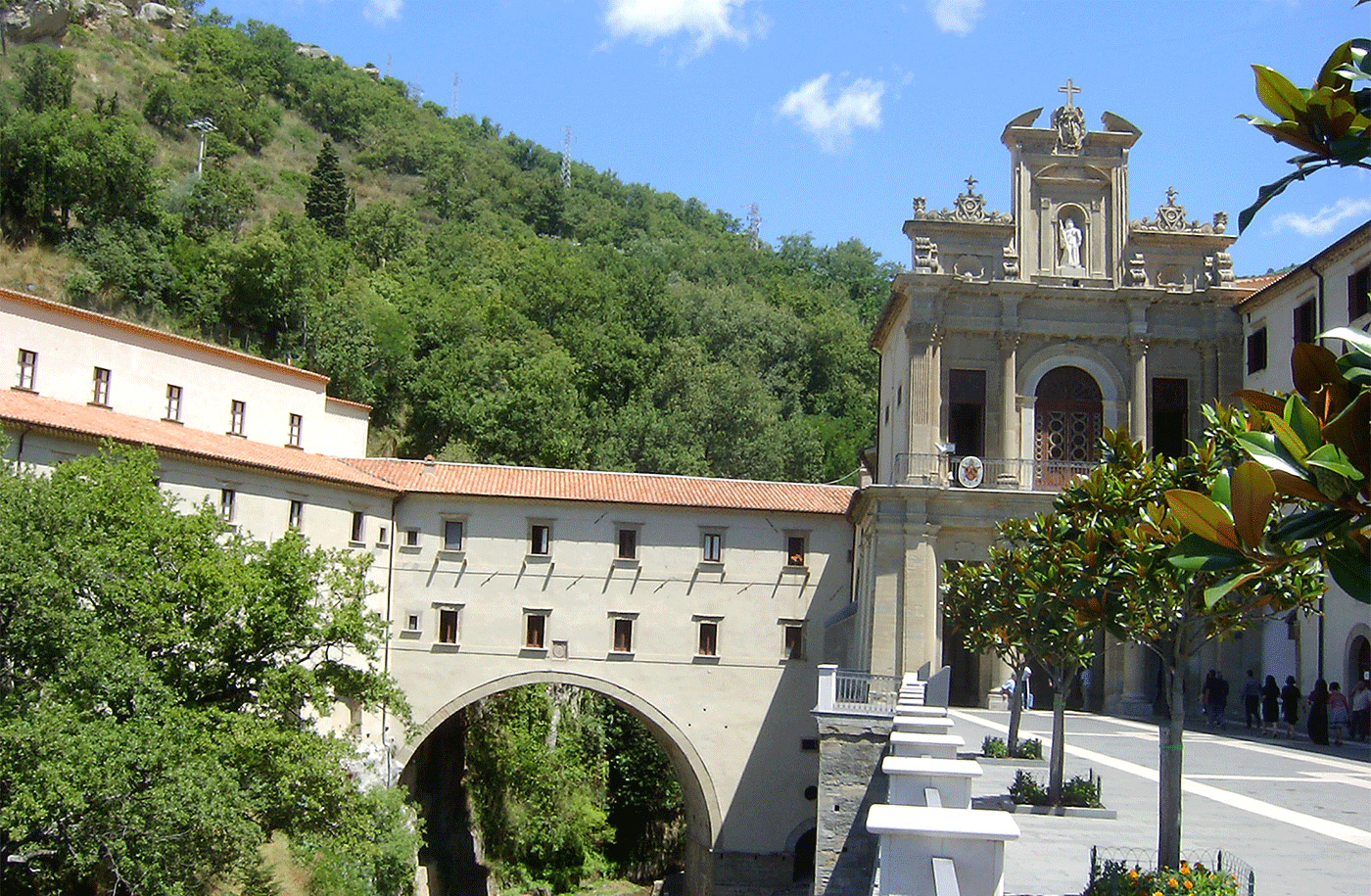 where among many other things typical feminine clothes from Belmonte can be seen. Return to the hotel. Dinner and overnight.

Day Three: PAOLA – AMANTEA
Breakfast at the hotel and transfer to Paola. The morning is dedicated to the guided tour of the places where St. Francis of Paola lived: the Sanctuary and the new church, the cloister, the hermitage of St. Francis, the furnace where the saint performed miracles, the ancient Romitorio built by St. Francis, the fountain of the “cucchiarella” and the bridge of the devil. Return to the hotel for lunch (optional). In the afternoon visit of the historical center of Amantea dating back to the Romanesque period. For some time not only the calabrian people have been paying attention to visit the medieval old part of the city, with its innumerable narrow streets that lead to the ruins of the castle with towers and bastions discreetly preserved, or to see the San Francesco d’Assisi Church with some ruins left there, or the Monastery of San Bernardino da Siena where you may admire the Madonna by Antonello Gaggini. In the end return to the hotel. Dinner and overnight.

Day Four: DIAMANTE – PRAIA A MARE e l’Isola di Dino
Breakfast and leave for Diamante. Since 1981 it has been known as the city of murals since the painter Nani Rozzetti for the mayor’s request brought 85 artists from all over the world who, armed with paint and brushes, began to paint directly on the walls of some houses, on the façade of the buildings and the districts of the historic center. The paintings on the buildings and also the drawings and poems were composed of famous people, who, as time passed, became more and more numerous along with the increased number of visitors from all over Italy. Among other particular interests the outer wall of the Mother Church reveals the history of Calabria traced by a couple from Ferrara. Diamante is also renowned for its chili pepper, for its coasts and for the locals’ extraordinary hospitality. Subject to availability, we will visit the chili pepper Museum in Maierà, a museum created and promoted by the National Academy of Chili Pepper of Diamante. Free time for a walk. Lunch at a restaurant (optional). In the afternoon transfer to Praia a Mare. 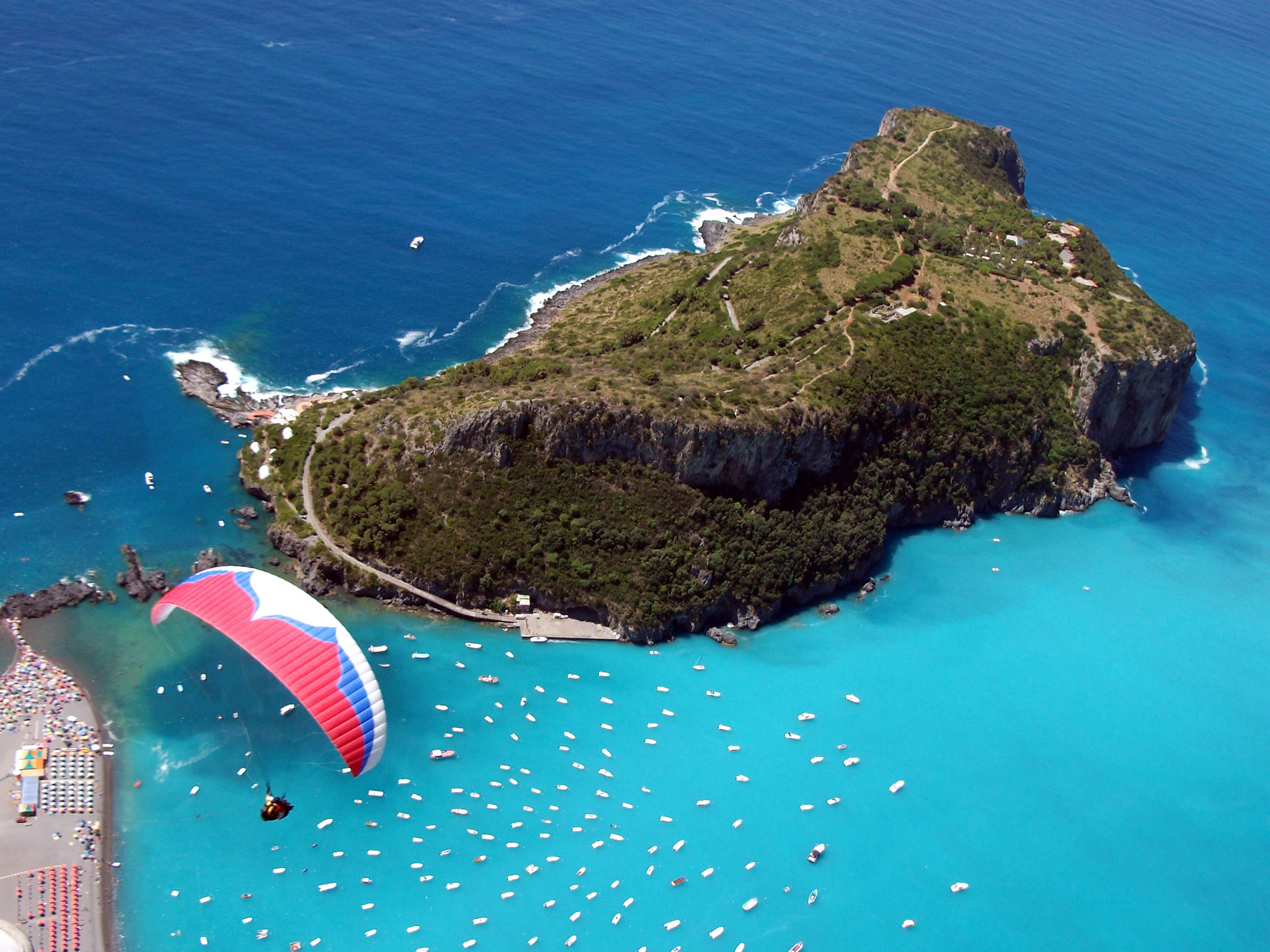 The life and history of its center are linked to the cave of the Sanctuary of Madonna which can be accessed by stairs. This temple preserves a wooden statue of the Madonna col Bambino according to a legend from the 14th century also a statue of the Madonna della Neve next to it. Lately, within the cave there have been important findings from the Stone Age making this place even more interesting to be visited. It is appreciated by the majority of tourists for its natural and artistic beauty. Praia is mostly known for the island of Dino with its numerous caves. The cave of the Frontone, of the Falls, of the Lion, of the Sardines and the well-known Blue Cave rich in the reflections of the sea, they all may be visited by boat. Near the island on a rock stretched out towards the sea you may still admire a well preserved watchtower. Optional excursion to the island of Dino or visit of Praia a Mare. Return to the hotel. Dinner based on typical local products. Overnight.

Day Five: ALTOMONTE – MORANO CALABRO (one of the most beautiful towns in Italy)
Breakfast. Leave for Altomonte, one of the most interesting towns of the Calabrian inland. Visit of the town, the Norman Tower, the imposing church of S. Maria of the consolation of Norman origins with the works of art inside, the Church of San Giacomo with precious baroque furnishings, the museum and the artisan shops in the center. Visit, together with tasting, of a local company producing “Moliterno liquore” specialized in the production of liqueurs such as: bitter, fragolino, limetto, limoncino, licorice, porcino, etc… inside there is the Lunch Museum with a restaurant (optional). In the afternoon visit of Morano Calabro: the “Nibbio” naturalistic Museum and the Norman Castle with an exhibition on mammalogy and ornithology, the Collegiate Church of the Maddalena which among other works preserves the “Vivarini”, the precious polyptych. Return to the hotel for dinner and overnight.

Altomonte is an Italian municipality of 4 427 inhabitants [2] of the province of Cosenza in Calabria. It is part of the club of “The most beautiful villages in Italy”.Read more

Diamante (Diamàndë in Calabrese [3]) is an Italian town of 5.292 inhabitants [1] of the province of Cosenza in Calabria. It is located on the north-western Tyrrhenian coast of Calabria.Read more

Amantea (A ‘Mantia in the Amantean dialect) is an Italian municipality of 13 981 inhabitants [1] of the province of Cosenza in Calabria. Amantea is a lively city rich in cultural traditions, events, works and monuments of historical and artistic interest, famous seaside resort on the Tyrrhenian coast located between Lamezia Terme and Paola. The Read more

Fiumefreddo Bruzio (Jiumifriddu in Calabrian dialect) is an Italian town of 2.940 inhabitants located in the Southern Tyrrhenian Cosentino, in the province of Cosenza. Tourist place of great value since November 2005 [2] in the prestigious club of the most beautiful villages in Italy, and together with Altomonte and Morano Calabro is one of the Read more

Belmonte Calabro, is an Italian town of 1,986 inhabitants, in the province of Cosenza, in Calabria. The village, four kilometers inland in a panoramic position on a hill overlooking a vast stretch of the Tyrrhenian Sea, was founded by the Angevins in the second half of the thirteenth century. The fiefdom was ruled by the Read more 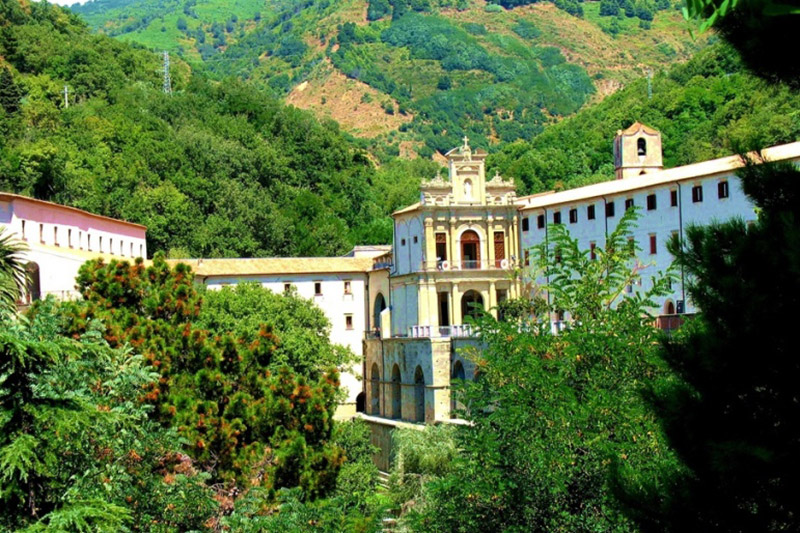 Paola It is mainly known for being the birthplace of San Francesco di Paola and houses the Santuario del Santo, the center of the order of the minimum friars. The presence of the sea, together with the beauty of the mountain ranges in the immediate vicinity and the presence of a prestigious sanctuary dedicated to Read more

The toponym Muranum appears for the first time in a milestone of the II century BC, but if the Roman origins of this Regio-Capuam station are clear, the etymology is uncertain: some think of the mulberry trees of which the territory abounded, who to the Greek word méruma, that is “cumulus”, because the buildings seem Read more